Creating the Joglekar memristor model in Xyce from scratch

In a previous post titled Well-posed Memristor Modeling with Xyce and Verilog-A, we showed how to create Verilog memristor models for simulation in Xyce. In this post, we take memristor modeling in Xyce one step further and show how to create a device model from scratch written in C, just like all the existing native devices found in Xyce. At the time of this writing, there doesn’t exist a complete official guide for writing native device models in Xyce. To figure all this out I pieced together various documents, got great help from the Xyce team on the Xyce Users Forum, and learned from long sessions of trial and error. I hope this “Unofficial Xyce Native Device Guide” is helpful to someone else attempting to create a native model in Xyce and helps avoid some of the pitfalls that I ran across.

There is some unofficial documentation that can be generated from the Xyce source code, which can be used to gain insight into how the Xyce engine works and how devices are hooked into the simulator. Reading the Xyce Mathematical Formulation documentation is also helpful. While both documents are useful, there are some holes in the explanations. It would be useful if the Xyce Mathematical Formulation document tied the theory to practice by referencing code in the core simulator and in one or more device implementations. The source code documentation could also be improved with better documentation that describes what’s specifically being done in the code, especially for different devices. The existing memristor model implementations lack useful comments almost completely.

You can generate the Doxygen documentation if you have Doxygen and graphviz installed on your system (it should be available in the same package management system you used to obtain your third party libraries for building Xyce). Simply cd to the “doc/doxygen” directory of Xyce 6.6, and type “doxygen Doxyfile”. The files mentioned in the “device intro” will be created.

Let’s assume we have a directory for installing Xyce called ~/workspaces/workspace_eda and that you installed the source code there in folder Xyce-6.6. Generate the docs like this:

A folder titled html will be generated with a ton of files. Open up index.html in a browser. You’ll want to click on Circuit Device How To ... in the left side column and read through that to get started.

While it is not recommended to use an ADMS-generated device implementation to bootstrap your own device development, if you have been creating Verilog-A models and integrating them into Xyce, it may be worthwhile to see what C file was generated from your Verilog-A file.

To see the C output of ADMS, you can use the “-d” option of buildxyceplugin, which will simply prevent the script from deleting the intermediate files it produces.

According to a request for help on the xyce-users forum:

You are probably best copying one of the existing MemristorTEAM model and replacing its guts. Those files will have enough of the basic boilerplate to serve as a template. The code generated by ADMS could also be used as a template, but may contain unnecessary and distracting complications. Make sure to change the level number in the registerDevice and registerModelType calls in the registerDevice function.

In other words, cloning an existing device implementation and tweaking it is the better approach as the Verilog-A/ADMS method creates too much code bloat.

The following instructions assume you’ve built Xyce from source previously. If you haven’t read Build Xyce from Source for ADMS Verilog-A Model Integration yet, you should go ahead and do that before continuing on.

The TEAM Memristor Model in Xyce

As a first step, we make sure we can actually simulate the TEAM memristor model in Xyce. We take the example directly out of the Xyce Reference Guide on page 484. 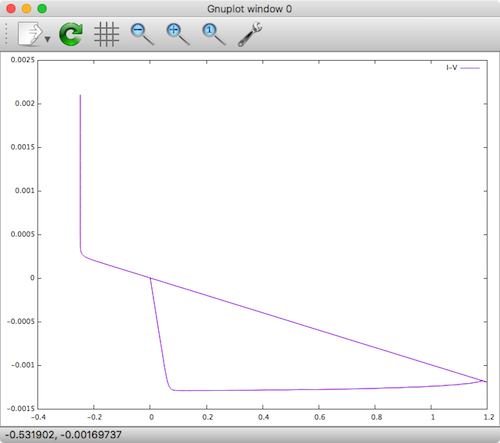 It definitely looks strange, but at least it sort of looks like a hysteresis loop. I also tried some of the other window functions, but none of them worked. I either got straight line plots or the initial DC operation failed to converge. While I probably needed to play around with the other parameters more, I gave up.

Next, we try the Yakopcic model from Xyce, again taking the example directly out of the Xyce Reference Guide on page 484. 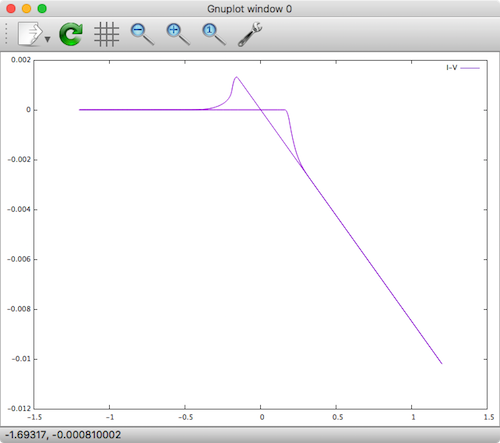 That looks much more like a successful memristor device hysteresis loop. It does however look like the current direction is flipped. I decided to clone this device as a basis for building my new memristor device into Xyce.

In N_DEV_MemristorJoglekar.h, I updated the following struct, creating a new Y device type with name YJOGLEKAR.

In N_DEV_MemristorJoglekar.C, I updated the following method, defining a new device type called joglekar with a model level 1. I guess it would have also been possible to just create another memristor device type and give it a level=4, as 2 and 3 already exist for the TEAM and Yapokcic models respectively.

In the following files, I needed to add references to the new model.

It’s pretty obvious what needs to be added to these files, so I won’t explain it here in detail.

There are 3 steps we need to take now to rebuild Xyce: 1) run “bootstrap” script at the top level directory to regenerate all the Makefile.in files in the source tree, 2) re-run configure in your build directory, and 3) build it.

Let’s assume we have a directory where the Xyce source code exists called ~/workspaces/workspace_eda/Xyce-6.6.

If you are following along on a Mac you may need to first install the following tools with Homebrew:

, otherwise you will probably get the following errors when running ./bootstrap:

After successfully running the ./bootstrap script, you should see that src/DeviceModelPKG/OpenModels/Makefile.in has been updated.

Once the new device is hooked into Xyce, you need to compile the changes:

At this point and before coding the new device behavior it’s worth making sure everything is still working. Since I just cloned the Yakopcic model and gave it it new name, it should be possible to get the previous results by just changing the device name from ymemristor to YJOGLEKAR.

Before diving into making changes to the cloned device implementation, it’s worth figuring out exactly where changes need to be made, and which code blocks can more or less be ignored.

Each device will have some model parameters that define it. The parameters need to be defined and also loaded from the simulation file. The params are defined in N_DEV_MemristorJoglekar.h in the Model class:

The model params are loaded in N_DEV_MemristorJoglekar.C in the Traits::loadModelParameters method:

Note that the first string argument needs to be ALL CAPS.

Each device can also have instance parameters. For a memristor this could be the initial state of the device. The params are defined in N_DEV_MemristorJoglekar.h in the Instance class:

The instance params are loaded in N_DEV_MemristorJoglekar.C in the Traits::loadInstanceParameters method:

There are lots of methods in the device class that need to be implemented, however most of them can be ignored as they are simply boiler plate code necessary to integrate the device into the main Xyce simulation engine.

Xyce solves the Differential-Algebraic equation (DAE) F(X)+dQ(X)/dt = 0, and there are methods that you will need to implement to load values into the F and dQ matrices and vectors according to the Xyce rules and conventions.

Regarding the DAE functionality there are 6 methods that look important but can also be ignored. These can be ignored and left blank in the case of the original cloned Yakopcic memristor model because the model implements this functionality in three different but functionally identical methods in the Master class.

From a help request by me on the Xyce Users Forum, there’s a bit more explanation about the DAE mechanism:

The equation is basically Kirchoff’s current law. F(X) are those currents that can be computed directly, and dQ/dt are the currents from time-varying charges. Devices are responsible for loading F and Q each time they are called, as well as the Jacobian matrix for each term, dF/dX and dQ/dX. The Xyce time integrator takes care of differentiating Q and dQ/dX when trying to solve the DAE.

With Xyce/ADMS, that’s all you have to write, and ADMS generates the appropriate dF/dX and dQ/dX terms as well. If you’re writing in C++ directly, you have to code all that stuff yourself. You also have to be sure to set up the sparse matrix pattern (“jacobian stamp”) that defines where these quantities will be placed in the full system Jacobian.

Ignoring the above-mentioned 6 methods, the remaining three methods which must be implemented are:

Following are the three methods as I implemented them. Note that if you want to print out values to the console during simulation, you can use the Xyce::dout() << " x = " << x << std::endl; mechanism.

Note that in Master::updateState there are two methods called: I_V and X_var_F. These use the Sacado template mechanism, which comes with the Trilinos package that Xyce heavily relies upon to accelerate their simulation engine. Information on how exactly these templates function is hard to come by, but I did find a couple of resources:

I_V simply defines current as a function of voltage and the X variable.

This equation was conveniently defined for us in Biolek’s paper on the model in equation 4. As a side note, for the Yakopcic model the relationship is defined in equation 7 in A Memristor Device Model.

Admittedly, I don’t understand 100% how the Xyce team implemented the memristor model via these three DAE methods. I’m still trying to understand how it works, specifically the WHY of loading certain values into F, Q, fVec and qVec. I understand how the values that get put into F, Q, fVec and qVec are generated using the Sacado templates. I understand WHY the F matrix (3×3) elements (0,0), (0,1), (1,0) and (1,1) are set to G, -G, G, and -G respectively (just like how a resistor is implemented).

But here are my open questions when boiled down to the final details. 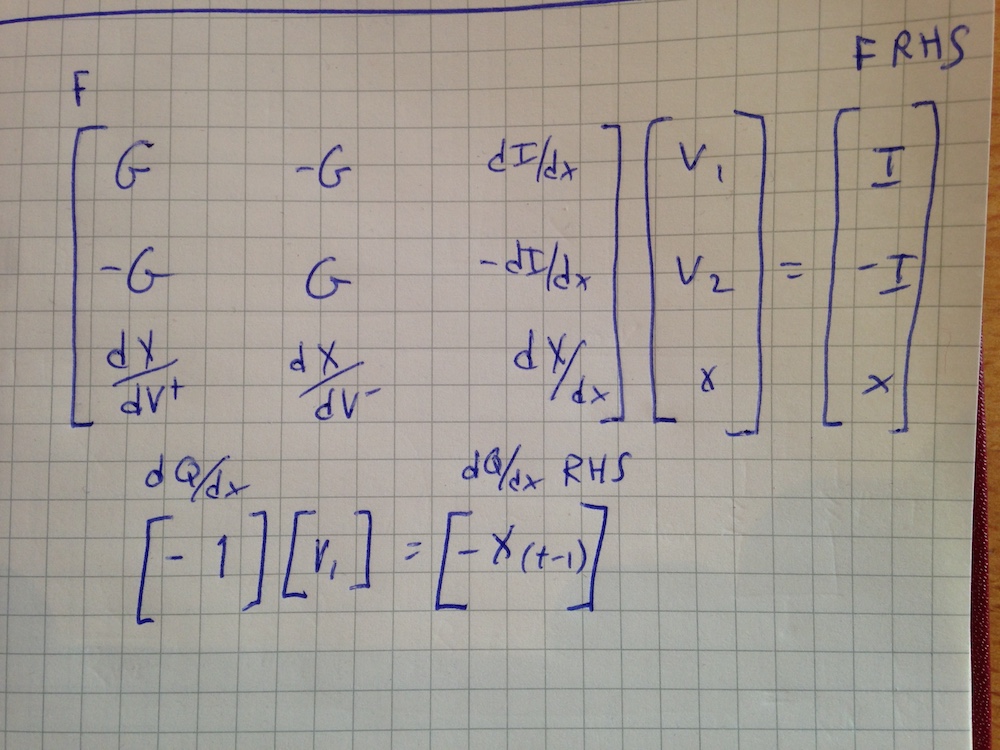 There seems to be an internal node defined x that is used to model the hysteresis behavior of a memristor, even though there is no “charge” being physically modeled. My best guess is that it’s modelling the memristor in a way similar to the way most SPICE models are implemented – as a voltage controlled voltage source regulated by an integrated change on a 1 F capacitor. 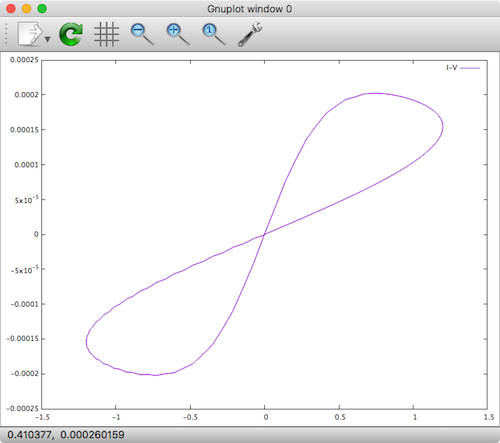 We see that the result is roughly the same as previously obtained when implementing the model in Verilog-A!

In this post I demonstrated how to implement the Joglekar memristor model natively in C code for the Xyce circuit simulator by first cloning an existing Yakopcic device model followed by implementing the Joglekar’s dX/dt behavior. Full source code for the model can be found at the memristor-models-4-all Project on Github.